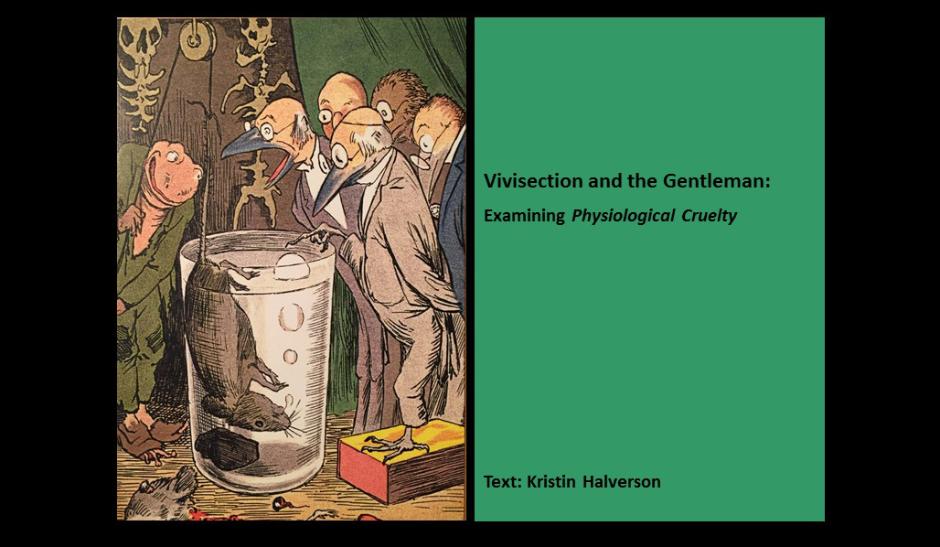 Vivisection and the Gentleman

During the mid and latter half of the nineteenth century, the life sciences became increasingly embroiled in debates involving experiments on animals. Regardless of the nature of these experiments, they were most generally referred to as “vivisections”, referring generally to all experiments on animals, attracting both criticism and ire from both scientists and laypersons alike. Typically seen as having a negative effect on the moral character of practitioners, those critical and outright negative to vivisection pushed for it to be forbidden, or at the very least, heavily restricted. In 1875 a Royal Commission began, attempting to establish political stance on the practice, and, if necessary, enact legislation based on the commission’s findings. This eventually lead to the Cruelty to Animals Act, which was passed in 1876, and introduced limitations and licencing for those wanting to carry out vivisections.

As one of the primary arguments used by opponents of vivisection called the moral sensibilities of practitioners and supporters of this method in to question, a counter-argument presented by proponents revolved around their qualities as gentlemen. Hagströmer Library has several interesting titles which serve as argumentative books and pamphlets lifting the positives of vivisection as a method of research, and outlining, at least in part, the “gentlemanliness” of those medical men who experiment on animals. One such being the anonymously written, but attributed to Frances Heatherley, Physiological Cruelty, or, Fact v. Fancy: An Inquiry into the Vivisection Question from 1883. Physiological Cruelty presents a somewhat ambiguous title, leaving some uncertainty at first glance how the “vivisection question” will be presented and discussed. In spite of this, the book is a positive representation of the alleged benefits of the method, where the “pseudo-scientific” arguments of the anti-vivisection movement are thoroughly criticised, whilst simultaneously trying to win over members of the public undecided in the matter to side with “true science”, and underlining the pious and humane nature of physiologists. Texts such as these were not uncommon during this period, in part because of the aforementioned First Royal Commission on the Practice of Submitting Live Animals to Experiments for Scientific Purposes (often referred to simply as the Royal Commission on Vivisection), and in part because of the frequent discussions regarding animal welfare and rights lifted in some of the more well-to-do circles in Britain at the time. Neither was it unusual that the book was written anonymously: anonymity allowed for greater leeway in what one could and could not say without damaging collegial relationships and one’s career. Heatherley/Philanthropos’ book offers insight into some common arguments, at least amongst the proponents of vivisection, in long-form.

Some of these arguments included underlining the importance of practical experience over merely theorising in the case of physiology, equating theorising to “groping in the dark”. The dismissal of experimentation on animals as a practical means of gaining knowledge was akin to practicing pseudo-science, and the author is clear that the utilisation of vivisection is the way forward for medical research, “always advancing, and always gaining increased power to cure sickness and soothe pain”. One would be mistaken, however, to assume that the author advocates for experiments as the only righteous form of medical practice: rather, he underlines the importance of vivisection as a way to “advance” medicine, presumably to bolster its scientific standing, and build upon, correct, and fine-tune an already-established body of knowledge. Though experiments were to be used alongside other methods of medical and scientific practice, their worth is valued higher than, for example, theory, as experiments were able to confirm through practical experience whether a theory corresponded to nature under certain conditions, or not.

Physiological Cruelty was written in a climate where vivisection was somewhat of a hot topic, particularly for those conducting, or interested in, research in the life sciences. Experimental physiology in Great Britain had some difficulty establishing itself and developing at the same rate as it had in France and Germany. Less than a decade prior to Physiological Cruelty, the Royal Commission on Vivisection had taken place, which lead to recommendations made to parliament on legislation on experiments on animals. The Cruelty to Animals Act was passed in 1876, and prohibited, for example, experiments presumed to be painful unless certain requirements were met (e.g. using anaesthesia), and required those practicing vivisections to hold a license, among other things. Intertwined with these events, was a growing, and vocal, early animal rights movement, that, although with internal differences on the question of vivisection, was generally positive to restrictions on the practice, and warned against the development of scientists lacking morality, hardened by inflicting unnecessary pain on animals.

Working against a traditionally conservative educational system where physiology had only begun to offer part-time research opportunities in the latter half of the 1800s, British physiologists interested in experimentalism and the teachings of French physiologist Claude Bernard were keen to help the method grow educationally and practically with a particularly British sentiment. Although experiments on animals were confessed to be, at times, painful, the physiologist, based on his (physiologists being exclusively men at this time) character, social standing, and education, possessed an inclination to limit pain whenever possible, as well as balance the measure of “necessary” suffering of the animal, with the potential benefits the experiment may have. These were qualities particularly bestowed on the British researcher, attuned to such sensitive matters in ways continental researchers were not. Because of this, exceptions to the practice were troubling, as they not only called into question the moral standing of physiologists and others practicing vivisection, but risked shuttling science back into the “dark ages”. In this regard, British physiologists could lead the way, utilising vivisection to develop the profession to the same levels of the often-referenced continental schools in France and Germany, but with greater sensitivity towards pain, to pointing out the sensitivity of British physiologists, and their exoneration from practicing needless cruelty during the Royal Commission. Interestingly, this sensibility is both a blessing and a curse for gentlemen of British heritage. In the case of the physiologists, according to Heatherley and other proponents, this meant their experiments were less inclined to be needlessly cruel. On the other hand, compassion and sensitivity to the suffering of “lesser creatures” was at least partially to blame for viewing vivisection negatively, and indeed the Cruelty to Animals Act.

Heatherley’s book serves as both a testament to the desire of some to bolster experimental medical science in Great Britain; but, also as a paradoxical account of the British gentleman as sensitively inclined, but overly sentimental depending on the situation.