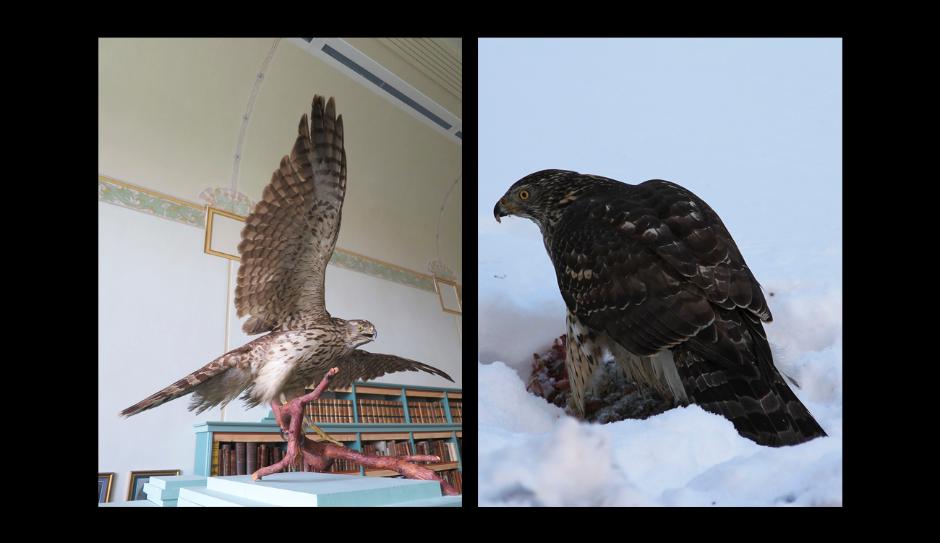 The Nature Around Us

Many of the members of the (all too small) staff at the Hagströmer Library have a keen interest in the natural world. The knowledge some exhibit is far from superficial. For those who haven’t visited us yet, it may be interesting to know that the library besides the obvious books also has a few specimens of other things. In some ways it is actually a natural cabinet in its infancy. While wandering around the library admiring the books, you may suddenly stand face to face with an open-mouthed blowfish with its bristling set of poisonous spines ready to hurt the careless! And when you have recovered from the surprise and start turning away, you discover that the fish is right next to a crocodile with sharp teeth. The latter is quite small, though, and has a red ribbon around its neck, which makes it look a bit less menacing. Elsewhere around the house you can find three more crocodiles, none of them large, the biggest measuring c. 114 centimeters from the snout to the tip of the tail. The last one is called Oscar and has been known by that name since the first part of the 20th century. High on a wall you can see a majestic golden eagle spreading its imposing wings, frozen in time just as it is about to take to the air from a branch.

The eagle is flanked by four colorful plates taken from John James Audubon’s Birds of America, originally published in installments between 1827 and 1838. This work is extremely valuable when complete, but single plates aren’t cheap either. The plates displayed at the Hagströmer Library, however well-made they are, are reproductions made in the German Democratic Republic in the 1960s. On a large desk we have several more of these Eastern German reproductions bound in two cloth-backed hardcovers. The books are quite cumbersome because of their size; 990 x 640 mm. Ove Hagelin, when guiding visitors, likes to turn to the plate depicting the passenger pigeon, and tell the sad story of how this bird, which could once be counted in millions and millions, was exterminated by thoughtless hunters.

Two goshawks perch on branches and, just as the golden eagle, they seem to be right on the verge of taking flight, looking for prey. In the spacious garden of the Hagströmer Library there is a large colony of rabbits. Visitors and staff alike look at these furry little animals with fondness, often remarking on how cute they are. Goshawks, of course, view the rabbits in a different light … A couple of winters we have been able to see modern-day descendants of the stuffed birds we have inside the library. You watch in fascination as the beautiful birds feed, while at the same time feeling a certain amount of pity for the poor rabbit.

By now you aren’t as easily astounded by strange creatures as you were when you first entered the library, and you hardly raise an eyebrow at the sight of a large rooster displaying fancy feathers, that surely must have impressed many a hen in the glory days of the rooster’s life. However, when you are well at ease, you look over your shoulder and get a glimpse of what, at first, seems to be a large shaggy dog in a corner. When your pulse is back to normal you realize that you are looking at a wild boar with glistening tusks, which would (or could) actually have been a far worse encounter than a dog, had it been alive – which of course it isn’t: you are looking at Dr. Schweinkopf who by his mere presence has guarded the library for many years now.

There still are a few things to see; if you look carefully you will find several corals and other fossils, hundreds of millions of years old, some not so old horns from deer, and you may even find the little hedgehog in one of the private offices if you are invited there. And there is pelt of a black fox from the early 20th century which was supposed to be worn by ladies around the neck to keep them warm – but the main purpose was surely to make them look elegant. It still has all its four paws and head in place. Fashion and taste change … Don’t worry if you spy rats on some of the book shelves – they are fakes!

Addenda: The collections have quite diverse origins. Some are donations; the blowfish is a gift from Sven Olof Sundholm, the small crocodiles are gifts from Nadja Barenthin Lindblad, the large one is a gift from Ebba Fernberg, whose father bought it in the 1960s in Gothenburg; the original owner is said to have been a sailor. The great golden eagle is from the estate of Torsten Gordh (1907–2010), a pioneer in Swedish anesthesia, and it was given to the Hagströmer Library by his son, also called Torsten Gordh. One of the goshawks is the latest acquisition and was conferred to the library by Ingmar B. Lindahl earlier this year. Other things are private possessions. The rooster and the boar belong to Ove Hagelin, the fossils to the author, the deer horns to Eva Åhrén, the hedgehog to Anna Lantz, and the second goshawk belongs to Emil Hagelin. Finally the black fox pelt Gertie Johansson has inherited from her grandmother. It was bought in the shop of E. O. Lindmark, Upplandsgatan 22, Stockholm, in the first years of the 20th century. But before it ended up for sale in the fur dealer’s shop it must have spent its life on a fox farm which specialized in black foxes. And just such a farm was situated where the campus of Karolinska Institutet is now …