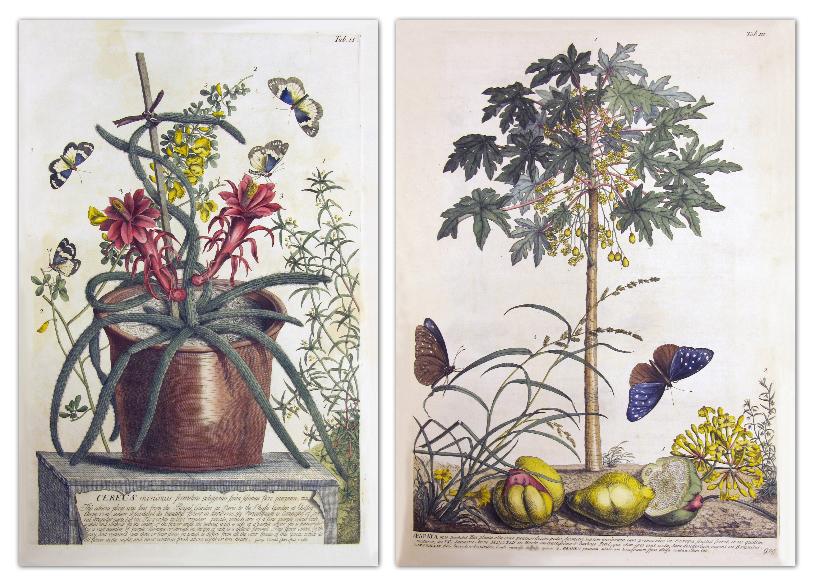 In the autumn of 2014, I had the privilege to give a talk to the Friends of the Hagströmer Society on the Bergius Library, a private collection from 1790 belonging to The Royal Academy of Sciences, today at the disposal of Stockholm University Library.

Peter Jonas Bergius (1730-1790) and Bengt Bergius (1723-1984) were the brothers who put together this collection. Peter Jonas was a successful doctor and contemporary of Carl von Linné who was very interested in botany and horticulture. Bengt’s interest was in history, and not only did he help Peter Jonas to acquire the literature he wanted but he also organised and looked after the library they accumulated together. Today, the Bergius brothers are best known for lending their name to Stockholm’s Bergius Botanic Garden, which was once part of the Bergielund estate in what is now the Stockholm borough of Vasastan.

What is less known is that their vast collections of natural-history specimens, including a herbarium that outrivalled Linné’s own, insect collections, books and monographs that the brothers kept at Bergielund are still preserved today. The printed books and a small portion of the handwritten material are now kept as the Bergius Library at Stockholm University Library and the archive material and copies are at the Royal Academy of Sciences; the herbarium is maintained by the Bergius Foundation in the Bergius Botanic Garden. However, it is important to remember that all these various material sources are part of one and the same context, and it is sometimes not that easy to decide what belongs to which category.

Thanks to the brother’s very clearly worded testament, which stipulates that the book collection may not be broken up and dispersed amongst different libraries, sold or traded in, the Bergius Library is still intact. In that the collection has remained in its original condition since 1790, we gain valuable insight into the contents of a late 18th century private book collection. A great deal of correspondence is preserved in the brothers’ archive at the Royal Academy of Sciences, shedding interesting light on how they went about purchasing and otherwise trading in books for their collection. All this makes the book collection and all the information surrounding it of importance for everyone interested in the history of private libraries during the 18th century in general, regardless of subject area.

The main bulk of the collection concerns natural history, botany (in the form of herbals) and gorgeous botanical charts and travelogues full of descriptions of the flora and fauna of distant lands. Other subjects covered include history, medicine and theology. There are also numerous private writings, such as Peter Jonas Bergius’s handwritten garden diary, which he kept from 1773 up until five days before his death in 1790. The diary also contains details of their private and social life at Bergielund. The brothers were members of the Royal Academy of Sciences, which not only provided them with a circle friends and acquaintances, but also gave them access to a useful network for the acquisition of scientific literature from all over the continent.

The collection extends over roughly 210 running metres. The number of titles is hard to ascertain, but has previously been estimated at approximately 10,000 based on the library’s extant catalogues. One single book was printed in the 1400s, and the rest make up one of the most complete collections of botanical works in Sweden between the 16th and 18th centuries. There are a great many catalogues of collections of natural-science specimens and cabinets of curiosities from all four corners of Europe. Amongst the monographs are catalogues of herbal cures and recipes for medicines collected in the late 1500s and early 1600s, as well as 18th century medical journals – items that Peter Jonas Bergius doubtlessly found fascinating.

The books are searchable online in the Royal Academy’s scanned card catalogue, but owing to its sheer size it is almost impossible to grasp the full extent of the Bergius Library. To make matters easier, I have therefore scanned in a two-part handwritten catalogue of the Bergius Library from the 1830s so that it may be made freely available on the net via the university library’s websites: http://specialsamlingar.wordpress.com/2014/10/27/bergianska-bibliotekets-katalog/

I would, however, like to emphasise that this must be seen as a temporary expedient only until the library’s material has once again be re-catalogued online in Libris, the Swedish Union Catalogue; only then will external researchers or booklovers truly be able to hunt out most and the best of what this remarkable book collection has to offer.

Most of the herbals and medical literature in the Bergius Library are also likely to be found in the Hagströmer Library. This reminds us how important it is for libraries to keep in contact and cooperate with each other on particular subject fields in which the content of the book collections are not only respectively tangential and overlapping but also mutually complementary.