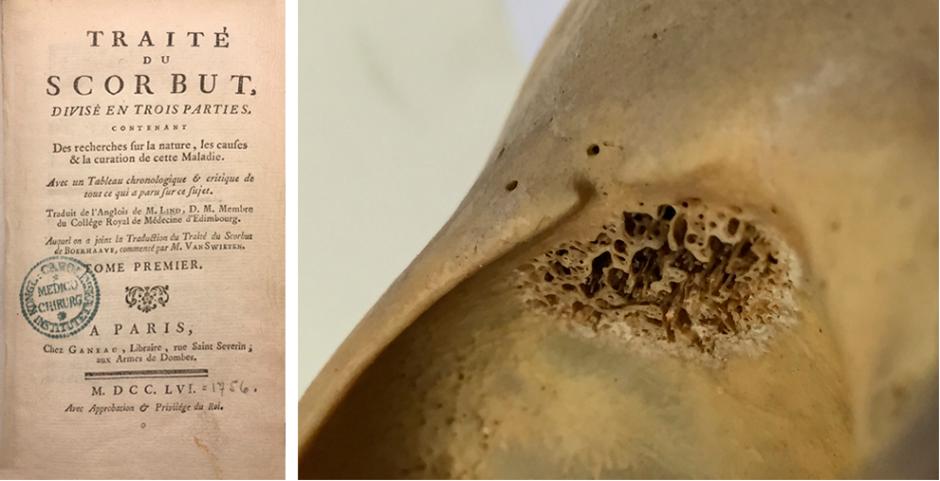 Some spinach a day keeps the doctor away

Eating nutritious food has always been important to good health. If we don’t get enough nutrients in our early years or if our diet is too samey, we can develop deficiency diseases that, at worst, can leave traces on our bones. There are several such marks that are relatively common when making osteological analyses, some of which can be seen in the material housed in the anatomical collection at KI’s Medical History and Heritage Unit.

Common signs of deficiency disease
Starting with the skull, malnourishment often manifests itself as visible changes in the orbital roof, where tiny holes and porosities form that in severe cases can suspend like peat moss. The condition is called cribra orbitalia, and has traditionally be interpreted as a sign of iron deficiency anaemia. Anaemia has several different aetiologies. Low birth weight can make an individual more precociously susceptible. Diarrhoea, haemorrhaging and intestinal parasites are other possible causes. Similar hole patterns can also be seen on the top of the skull, where they are called porotic hyperostosis. This kind of skeletal change is most common in children, as it generally heals in adults. This is because young individuals have a great deal of red bone marrow, which more readily reacts with this type of lesion. In recent years, researchers have looked into if it might be caused by a deficiency in something other than iron, such as vitamin B-12. Since the most sensitive time is childhood, physiological stress can leave traces in the form of visible, even ridged horizontal stripes that appear mainly on the incisors. This condition is called enamel hypoplasia and develops while the teeth are developing. It is possible to calculate at which age the stripes appeared; if they are on the milk teeth, it means the child suffered stress while still in the womb – i.e. that the mother suffered stress or some kind of deficiency while pregnant. While it is not fully known what causes the striping effect, researchers have been interrogating the possibility that it is a result of stress related to childbirth, malnutrition/stunted growth, imprisonment or other kinds of social stress. Other stripes that can appear on the long tubular bones are discoverable by X-ray and are called Harris lines.They too can be caused by disease or trauma and appear when growth is suspended, but whether this suspension is natural, given that growth can stop and spurt in different periods, is a moot point.

Scurvy
These days, we know that scurvy is caused by vitamin C deficiency, and most people know that sailors could lose their teeth when they were at sea for long periods of time with no access to fresh fruit or vegetables. For some sailors, vitamin C deficiency could be so severe as to prove fatal. Vitamin C, or ascorbic acid, helps to build a strong immune system as well as cartilage and bone tissue, but cannot be produced by the body. Scottish navy doctor James Lind (1716-1794) discovered that the juice of citrus fruits could help the complaint and started to work on prophylactic measures. Lind had several predecessors, but it was his work that led to the discovery. Thanks to Lind, many hygiene and sanitation improvements were made to life on board. He was the first person to make a thorough and documented medical study on humans. At the Hagströmer Library, we have copies of the first French edition of Lind’s Traité de scorbut. It was published in 1756 and is thought to be as rare and prized as the first English edition A treatise of the scurvy from 1753.

The critical component of vitamin C was not discovered until 1927 through the work of the Hungarian biochemist Albert Szent-Györgyis (1893-1986), whose research went on to earn him the Nobel Prize in 1937.

Traces of vitamin C deficiency are seldom found in archaeological bone matter since it expresses itself in swollen mucosa, bleeding in the skin, periosteum and gums and periodontitis, the causes of which are many. Vitamin C also helps the body to absorb iron. This deficiency was probably more uncommon before the introduction of agriculture when hunter-gatherers would eat more fresh and unrefined food, such as berries, fruit and vegetables. Part of the vitamin is destroyed during cooking and boiling. Maize, which was introduced to Europe by Columbus, has often been associated in archaeological studies with a deterioration in public health. It is high in sugar and starch and has been shown to impact on both dental health and iron absorption. However, the plant has been a food staple for centuries in other parts of the world. The conclusion can be drawn that the advent of agriculture contributed to a slow decline in human health. Very much on account of the increase in wheat and maize in the diet but also of settlement, the consequence of which was the more rapid spread of disease, with the accumulation of waste and stagnant water aggravating bacterial growth and animal husbandry aiding the transmission of zoonoses.  Both lactose and gluten intolerance appeared after the arrival of agriculture, although the pattern is complex and the changes gradual. For instance, in Southeast Asia and Japan, where the staple food is rice, caries has not increased since its introduction. It’s always hard to compare hunter-gather societies and modern agriculture with the early agrarian societies. Archaeologist Charlotte Roberts stresses that one must also factor genetics and environment into understanding how the human body reacts to different conditions.

Rachitis or the “English disease”
Once, rachitis was mainly common in children. The condition is more commonly known as rickets and is caused by severe vitamin D deficiency, which eventually gives rise to soft bones, a condition that in adults is called osteomalacia. This softness is especially evident in the long tubular bones of the arms and legs, which become bent under load. The disease can also cause deformities in the pelvis, which can later lead to life-threatening complications during childbirth. The KI collection houses a couple of examples of babies who died of the disease before the age of 2, probably from a combination of infection (maybe TB) and muscle weakness. In Sweden, folk traditions were once rife about rickets and how it could be cured. Protective amulets were common as a prevention, while it was thought a special tree with a natural crevice or looped branch large enough to pull the sick child through (known as a vårdbundet or “care-bound” tree) possessed curative powers. A photograph of this practice (called smörjning) can be seen in the Digital museum. Dr Nils Rosén von Rosenstein (1706-1773) wrote a long account of childhood rickets, claiming that “the disease shows itself when the child starts to teethe. Should it then proceed to become emaciated, should the skin start to slacken and the belly to swell, particularly on the right, the head to grow large, the face to become puffy and pale with large veins in the neck, and the bone around the joints to become enlarged: it thus already has a strong touch of this disease.” The description continues in the same style. He also warns that “Women who have or have had this ailment should think well before marrying. If their pelvis has become too narrow they will either have difficult deliveries and tend to produce stillborn babies or will die in childbirth.” According to Rosén von Rosenstein the English disease had several causes, but usually the blame was placed on the parents, who had brought the disease upon the child through their advanced age or promiscuity; or on the baby having been raised in a “low-lying, damp and marshy place”. He thought that children with rickets had too much acid in the body. In the 19th and early 20th centuries, Henrik Berg’s (1858-1936) Läkarbok was a standard medical work. Berg recommended, amongst other things, fresh air and sunshine, saline baths, horse-hair mattresses, dry-rubbing with wool and washing with salted aquavit. Potatoes and farinaceous food was to be reduced in favour of fresh milk, eggs, good quality bread, grain-based soups, meat soups, gruel, wholemeal bread, rusks, fruit, berries and vegetables – a diet that wasn’t always so easy for a poor family. Rickets often went hand in hand with tuberculosis.

Rickets was, as its popular epithet implies, a common disease in English industrial towns, where buildings were densely packed and very little light was let in between the houses and the factories. Many English doctors looked into a possible cause. One theory was that the muscles grew more slowly than the bones, which thus became curved. In was only in the 1700s that doctor Thomas Percival (1740-1804) discovered that cod liver oil was an effective prophylactic, but it was not until the 1900s that scientists began to understand the relationship better. In the 1930s, after further research, Nobel laureate Adolf Windhaus (1876-1959) was able to demonstrate that the substance ergosterol was converted into vitamin D when the skin was exposed to sunlight.

Eventually, children started to be given fish liver oil, then vitamin A/D – and these days only vitamin D drops. In Sweden, dairy products have been fortified with vitamin D since the 1960s. Nowadays we know much more about the body’s vitamin D needs. Ninety per cent of essential vitamin D (which is actually a prohormone) is produced in the skin through exposure to the sun. The primary function of the vitamin is to regulate the amount of calcium and phosphor in the blood to ensure effective bone mineralisation. It also helps the body to absorb calcium from the gut. It is not that common to find curved long tubular bones amongst osteological material or in anatomical collections, for even if a child is affected by the disease, the bones can remould themselves and regain their strength later in life. In today’s society, the disease is sometimes found in people who cover themselves for religious reasons and thus deprive their skin of sunlight. Symptoms can be a pricking sensation in the hands or muscle cramp. Pregnant and nursing women are particularly vulnerable. A correlation can also be seen with diets that are low in dairy products and high in fibre. A child also risks suffering vitamin D deficiency if its mother had low vitamin D levels during pregnancy; elderly and sick people who spend lengthy periods of time inside either in hospital or at home without access to the outdoors are in the risk zone. A moderate amount of sunlight is therefore vital for everyone. Many people take vitamin D supplements during the winter, and research continues on what the long-term effects of vitamin D deficiency might be.