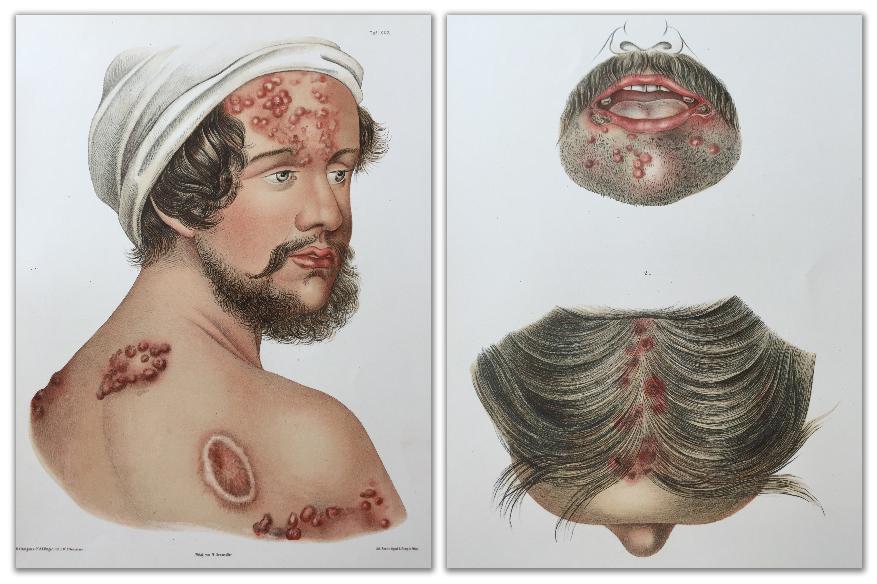 Not everything was better before, part II

A teacher of osteology once said: “The worse for them, the better for us.” Although this might sound rather cynical, what she meant was that diseases that afflict people for a long time can leave interesting traces behind in the bones. This makes things very exciting for osteologists and others, who can learn a lot from them about the diseases and how these individuals once lived. Many diseases that were incurable then can be treated today with drugs and vaccines; others become resistant with time, leaving medicines at risk of becoming impotent. Syphilis is one of the diseases of which we find traces in the crania in the anatomical collection at the Unit for Medical History and Heritage, KI. There are also some striking pictures in one of the works in the Hagströmer Library collection.

Syphilis is caused by the Treponema pallidum bacterium, and is known by many names, such as the French Disease, Lues and the Great Pox. It is a chronic, disfiguring disease that leaves traces on the bones as bacterial infections take root. Venereal syphilis is contracted sexually and can be passed from mother to fetus. Just like in leprosy, it causes ulcers, skin and soft tissue lesions and inflammatory disfigurements of the skeleton. The first symptoms appear on the genitals and around the mouth. 10-12% of sufferers develop skeletal deformities and in the case of congenital syphilis, the mortality rate is 50%. After a while, the bacteria migrate through the body via the blood, affecting the heart, brain and arteries. Some people suffer mental disorders or become paralysed in the final phases of the disease. The bone deformities are caused by gummata, inflamed, fleshy growths that lead to the disintegration and re-forming of bone in the cranium. Tubular bones, chiefly the tibia, were affected, and here traces can sometimes be seen of severe inflammation (boils and exostoses). Arthritic changes to bones and joints and disfigured teeth (e.g. Mulberry molars) can also accompany the disease.

Columbus’s voyages were a decisive factor in the spread of the disease, and it has long been a moot point whether he took syphilis from Europe to the Americas, or brought it back from the Americas to Europe – the route which most scholars now prefer, given that no traces of the disease (on skeletons) have been found in Europe from before 1492, while older such finds have been made in the Dominican Republic. Italian doctor and scientist Girolamo Fracastoro (1483-1553) thought that small seeds spread the disease but did not rule out the possibility that astrological and meteorological conditions could also play a part in its pathogenesis.

Syphilis arrived in Denmark in 1497 and then spread to Sweden. At first, the disease was mostly aggressive; later, its advance could be broken down into three phases. They tried every possible (and impossible) way of curing or relieving it: starvation cures, bleeding, laxatives, extract from the wood of the guajac tree, alum and zinc salves. Mercury was also commonly used as a medicine before the advent of penicillin, in the form of ointments, pills, injections and an inhalant. It did have a certain effect, despite what we know today of the element’s toxicity. Arsenic was another poison that was experimented with medically (including the Ehrlich-Hata compound 606) – naturally with serious side effects as a result. Sometimes, the wrong treatment could even lead to amputation. For a long time, doctors found that relief could be obtained by inoculating syphilis patients with malaria; they contracted a different disease but at least they were free of the very worst symptoms of their syphilis. Perhaps any price was worth paying to be spared the third phase of this terrible disease.