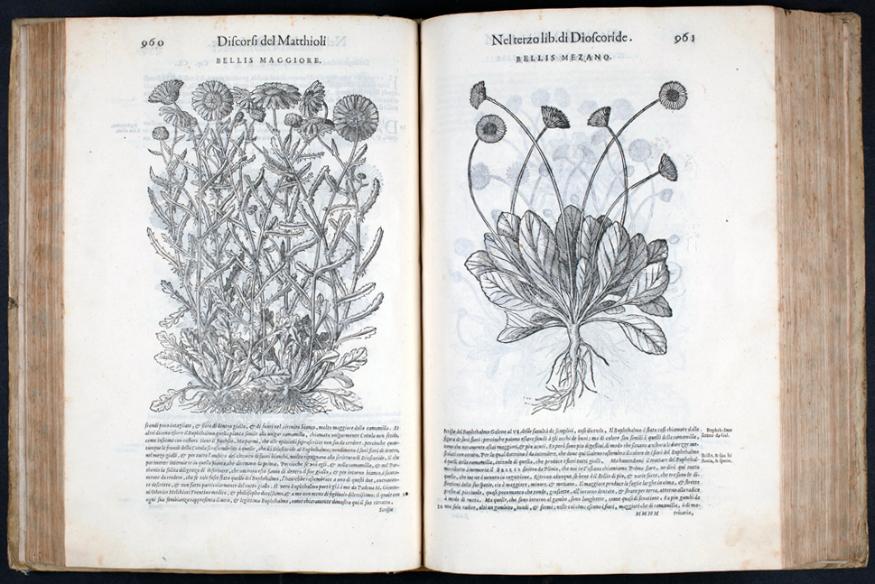 Mattioli’s commentary on Dioscorides was the most frequently reprinted herbal of the sixteenth century. The success of his work was phenomenal. There were editions with both small and large woodcuts but it is chiefly known from a small number of editions illustrated with over 1,000 large (nearly full-page) woodcuts, the ”grand Mattioli”. These large figures of plants are in every way immeasurably superior to the small woodcuts. The present Valgrisi edition of 1585 is one of those containing large-sized figures. The book has over 1,700 pages divided into two thick volumes, containing 1,031 woodcuts of which 932 are of plants and 99 of animals and genre scenes. An appendix on distillation can be found at the end, which is illustrated with six large woodcuts depicting furnaces or distillation towers. The designers of the woodcuts were Giorgio Liberale (1527– ca. 1579), an Italian artist from Udine, and Wolfgang Meyerpeck (ca. 1505–1578), a German woodcutter active in Prague.