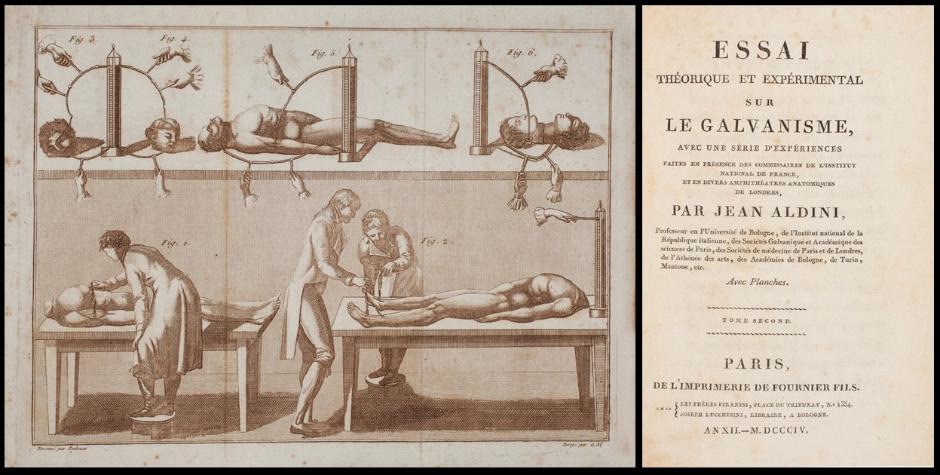 Medical Electricity and “Frankenstein”.
First edition of Aldini’s best-known classic, dedicated to emperor Napoléon – a landmark work relating to the central nervous system. "In the controversy over Galvani’s 'animal electricity' and Volta’s 'galvanic current' it was not the modest Galvani but his lusty nephew [Aldini] who wrote, lectured, and published in Italian, French and English on the theories and experiments of both his uncle and himself  . . . the effervescent Aldini became his uncle’s champion – so much so that Volta addressed his arguments to Aldini instead of Galvani” (Bern Dibner in DSB).

In October 1802, Aldini experimented before the Galvanic Society in Paris, and in January 1803, he was in England to lecture on medical Galvanism, performing demonstrations at several London hospitals. Aldini induced strong muscular contraction in the heads of sheep, chickens, oxen and other animals by putting leads from a Voltaic. pile into the ear and a nostril or on the tongue; the eyes would then roll or the ear or tongue quiver.

In 1804, Aldini caused a very strong muscular agitation in corpses, creating the illusion of a body preparing to walk, arms rising and falling or forearms lifting weights. His most dramatic performance was a series of experiments in galvanic action upon the beheaded corpse of Mr. George Foster, a murderer just executed at Newgate Prison. Aldini used a Voltaic pile of 120 copper and zinc discs and the muscular reactions he thus obtained led him to believe he could restore life to those recently overcome by drowning or asphyxiation.

Mary Shelley, who knew of Aldini’s work, used the idea of galvanic reanimation to brilliant effect in her classic novel Frankenstein (1818).