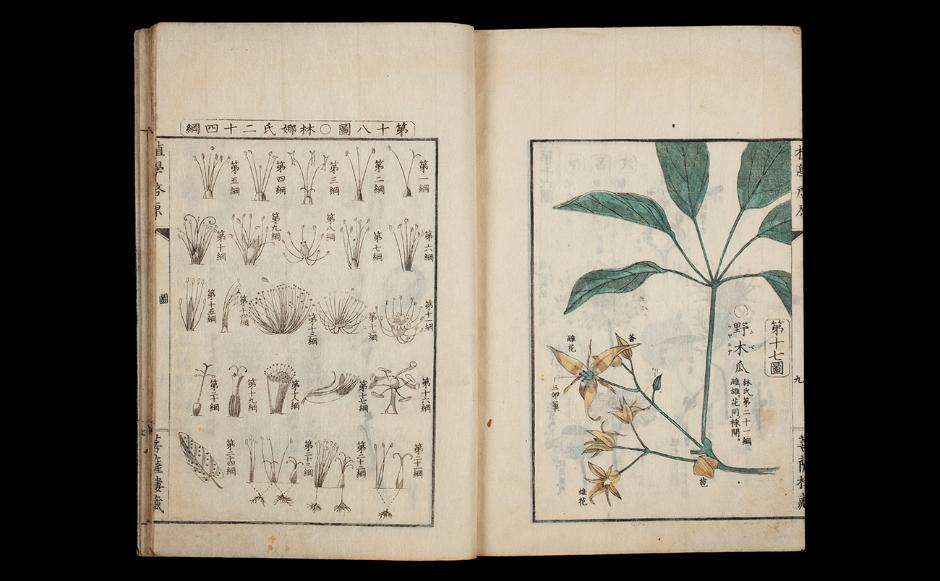 The introduction of Linnaeus’s binominal classification system of plants into the Far East, part II.
Yoan was a Japanese scholar known for his key role in introducing Western science into Japan. Although his span of life was short, his work contributed immeasurable in the advancement of science in Japan, especially the science of botany, zoology, and chemistry. His ability in foreign languages and his vast scientific knowledge surprised even Siebold. Influenced by Keisuke Ito’s Explanations of the twenty-four classes published as a supplement to his Taisei honzo meisu, which first introduced the Linnaean sexual system for the classification of plants in Japan, and under the guidance of the German botanist and physician Philipp von Siebold, Yoan published his epoch-making Shokugaku keigen (Principles of Botany) in 1834. It consists of three volumes written as an exposition of the western discipline of botany, the first to appear in Japan. Udagawa Yoan’s Shokugaki keigen is probably the first modern botanical treatise published in East Asia. The book is illustrated with 21 beautiful full-page botanical woodcuts printed in colours mainly taken from Dutch books and among them is the famous plate by George Dionysius Ehret of the 24 classes in Linnaeus’s sexual system of plants.
Ove Hagelin, 25 May 2016
View all the plates here!
Follow