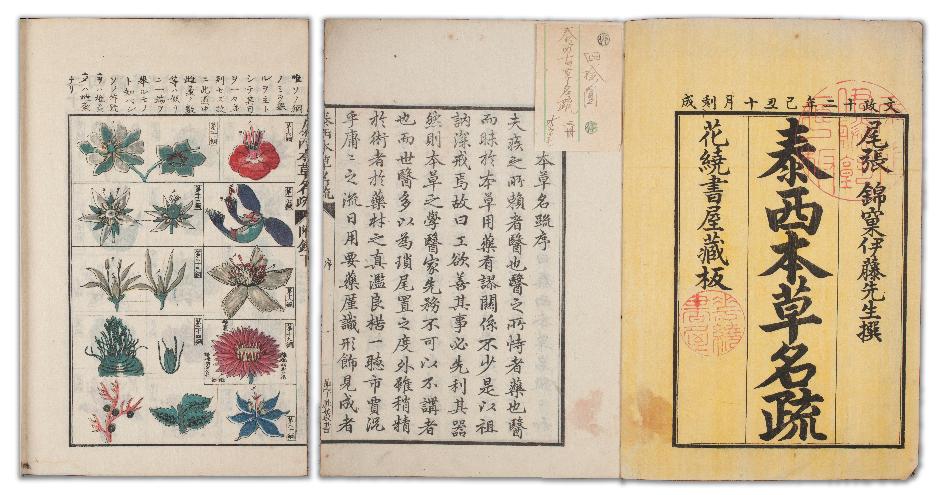 The introduction of Linnaeus’s binominal classification system of plants into the Far East, part I.
After a series of events involving several foreign powers, Japan put into effect the sakoku or ’closed country’ policy in 1639, which effectively isolated it for some two hundred years from all Westerners except the Dutch. They were confined to the small artificial island of Deshima in Nagasaki Bay connected to land by a bridge, and could not leave the island without permission. A strict ban was also placed on the importation of foreign books. A number of Japanese scientists and physicians were interested, however, in the scientific and medical knowledge that could be gained from the West, and for this reason advocated a limited relationship with the foreigners. They decided that they could best realize these aims through the facilities of the East India Company of the Protestant Dutch, who did not bring missionaries with them. The Dutch were thus allowed to maintain a factory on the small island of Deshima, but they too were regarded with extreme suspicion and were kept under very close surveillance.

The first of the three ”Dutch” naturalist and physicians who visited Japan was the German Engelbert Kaempfer, who stayed at Deshima in 1690-92,  and whose illustrated Japanese Flora appeared as an appendix to his Amoenitatum exoticarum (1712); 83 years later the Swede Carl Peter Thunberg, who had learned Dutch, arrived at Deshima, where he stayed for nine months in 1775-76. In 1784 Thunberg published his important Flora Japonica, which has given him the name of the ”Linnaeus of Japan”; the third great physician was Philipp Franz von Siebold who arrived to Deshima in 1823 and established a school of medicine and a clinic for the treatment of patients.  In 1827 the 25-year-old Keisuke Ito (1803–1901) went to Nagasaki to study botany under Siebold, who had brought a copy of Thunberg’s Flora Japonica with him to Japan. In 1828 Ito wrote his Taisei honzo meiso in three volumes where the Linnaean nomenclature was used for the first time in Japan. He used the scientific names of plants in Thunberg’s Flora Japonica, put them in alphabetical order, and added Japanese names. In the supplement he introduced Linnaeus´s classification system for plants as ”Explanations of the twenty-four Classes” illustrated with 24 colour printed woodcut figures. When Siebold left Japan he presented Ito with his own copy of Thunberg’s Flora Japonica, the very first copy to be seen in Japan. The meeting with Siebold became the turning point in Ito’s academic career. He published a large number of invaluable works on the knowledge of the flora and fauna in Japan. In 1881 he became the first professor of botany at the University of Tokyo and in 1901 entitled baron. In the same year he passed away at the age of 98.

Ito was indefatigable in his search for scientific knowledge and together with Udagawa Yoan he successfully led the Japanese out of the old natural history derived from the Chinese Pen-t’sao into the new science.