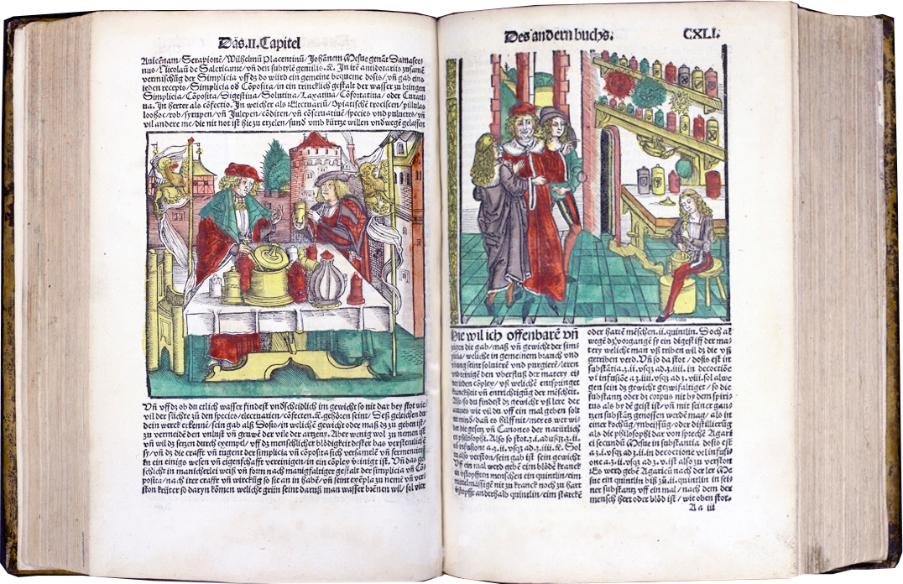 The first edition of Brunschwig's famous “Grosse Distilierbuch” left the press on February 12th, 1512. It is a gigantic work, far more than a mere book on distillation, a manual rather of pharmacological therapeutics. Brunschwig has here brought together his entire medical knowledge. It is a folio volume of 363 leaves illustrated with nearly 200 large and small woodcuts all coloured by a contemporary hand. The book is especially remarkable for the richness of its illustrations. There are 130 woodcuts of stills. Other woodcuts (some repeated) show blood-letting scenes, scenes at the sick-bed, various pictures of physicians with their urine flasks, apothecary's shops, etc. and finally several interesting anatomical illustrations, e.g. two representations of the eye, a viscera man, a man with the thorax opened, showing the heart, large cut of a phrenological head (showing the location of the memory ). Brunschwig advises the reader not to place too much reliance on the publisher’s choice of illustrations "for the figures are nothing more than a feast for the eyes, and for the information of those who cannot read or write." Many were borrowed from earlier works, but the fine title woodcut of an early alcohol still with cooling-coil and several other cuts of distilling vessels appear here for the first time.