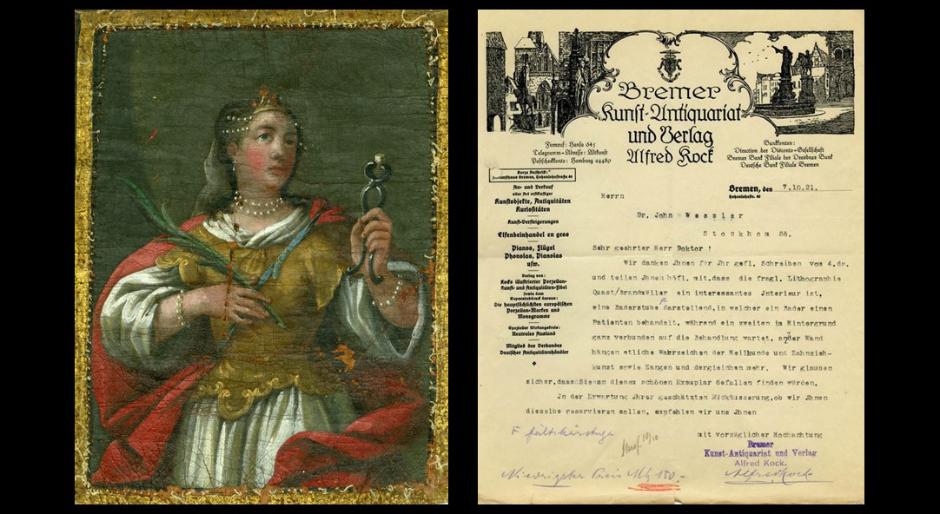 John Wessler and his unique collection

A few years ago, the Hagströmer Library was entrusted with an extremely rare collection of odontological pictures and objects from the Department of Dental Medicine at Karolinska Institutet. It had originally belonged to John Wessler (1864-1927), who assembled the collection himself in the early 1900s. As one of the foremost dentists in Stockholm at the time, Wessler was interested in most aspects of odontology: for instance, he was a champion of the modernisation of dentistry programmes, co-founder of the Institute of Dentistry in 1898, an advocate of “social dentistry” and secretary of the Swedish Dental Society. He was also noted in Sweden and abroad as a writer of numerous books and articles as well as a leading chemist who made and sold his own formulae of dental amalgam and dental powder. It was partly thanks to his income from this venture that he was able to finance his love of art. Maybe someone recognises the toothbrush he designed and marketed in 1895?

Wessler travelled widely, and was in contact with art dealers and dentists in Europe and the US. A hundred or so letters from cities like Berlin, Paris, London, Rome and New York relating to his purchases survive. From 1911 up to his death in 1927 he collected almost 800 pictures and artefacts dating from about 1400 to 1920. His collection includes over 500 prints and oil paintings, divided roughly equally into depictions of St Apollonia, the patron saint of dentistry, and dental practitioners and their patients. There are also a large number of gold, silver, iron and ivory toothpicks, miscellaneous dental implements (some more alarming than others), amulets, medals and photographs. He donated the collection to the Institute of Dentistry, now the Department of Dental Medicine, in 1923.

C O Henrikson, professor of odontological radiodiagnostics at KI between 1974 and 1990, was long the curator of the collection. Apart from maintaining, sorting and cataloguing the items, he published many articles on John Wessler and his collection, and arranged exhibitions. One such exhibition was at the Nordic Medical History Congress in Stockholm in 1997, where selected items were put on display. He finally consigned the collection to the custody of the Hagströmer Library in 2011. The Wessler collection is unique, and its pictures and objects spanning over five centuries give us a fascinating look at the evolution of dentistry. How many people today, for example, know what a dental pelican is? Or what links Tsar Peter the Great of Russia with dentistry?