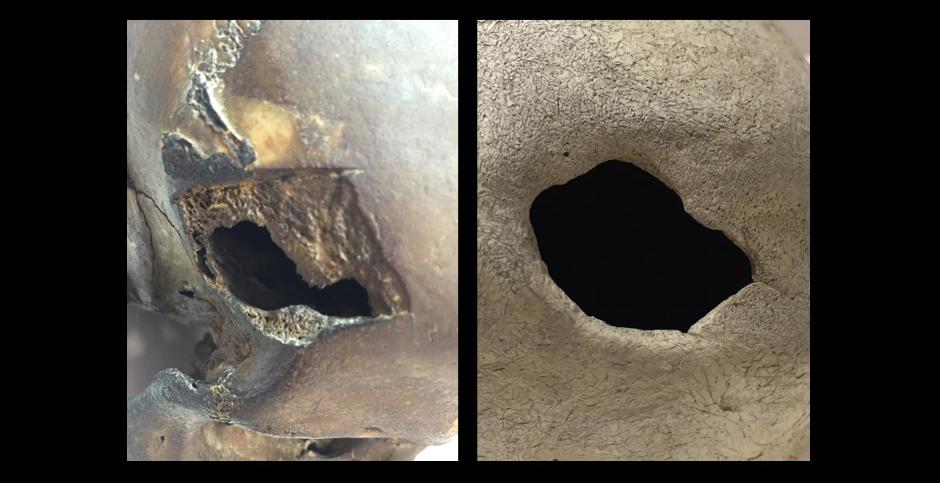 Holes in the head

Before the advent of modern precision tools for cranial surgery, it was desirable, and even essential to survival, for surgeons to have a steady hand. It is with a frisson of fascination that we look at pictures of trepanned skulls with one or more holes drilled into them. The holes were deliberately made and it is hard to believe that anyone survived the procedure. And yet the bone has clearly healed around the fringes of the hole or holes, indicating that the patient did indeed survive. Such holes have soft, rounded edges, and the healing process is first visible after about two weeks. It was essential that the surgeon caused no damage to the cerebral membrane or major blood vessels, and there must have been a serious risk of infection. The anatomical collection at the Medical History and Heritage Unit houses at least two trepanned skulls, one from Peru and one from Egypt.

Tools and methods – how many survived?
The scraping method was common in Europe, in particular England, while the preferred tools in South America were the drill and saw. Initially, surgeons used scrapers made of obsidian, flint or other kind of mineral, but eventually moved on to metal. Spade-shaped metal knives called tumis, an image of which features nowadays in the emblem of the Peruvian surgeons’ association In Peru, have been dug up by archaeologists from graves in Peru.

Trepanations were often performed on the left side of the scull and very rarely over a suture. The Greek physician Hippocrates and other writers recommended avoiding the sutures to eliminate the risk of damaging a major blood vessel. The left side of the skull is more prone to trauma caused by violence because attackers are usually right handed. Perhaps the left-hand bias of trepanation is because most injuries (and haematomas) occur on that side. It is also possibly due to the surgeon being right-handed. Apart from the anguish and fear that the patients must have felt, the most painful part of the procedure was the removal of the soft tissue or the scalp. Damage to the skull itself is not particularly painful and it is thought that alcohol, opium, henbane and mandrake were used as anaesthetics. Some type of covering must have been used after surgery. Either the skin was folded back over or the surgeon applied a lid, perhaps made of vegetable matter such as the bark, coconut shells or banana leaves found in later historical contexts.

The earliest discovered trepanations date back to the Neolithic era (c. 3,000 BCE) and were performed with flint blades. The scrape method worked better than punching holes through the bone, probably because the trepanners could proceed slowly and retain a certain degree of precision. There are many examples from France and South America, but the method was once practised the world over. Trepanners in Bolivia and Peru seem to have been the most successful and had the highest survival rate. There are skulls that carry traces of half a dozen or so healed holes! One study shows that over 50% of 214 skulls from Peru exhibit signs of healing, and according to analyses, 73% of trepanations there were performed on men, 24.6% on women and 2.4% on children, figures that tally with the high incidence of violence-related cranial trauma. Other studies suggest that the healing frequency increased between 400 BCE and 1532 CE.

Written sources and different techniques
The first written source describing trepanation is Hippocrates (c. 460-370 BCE), and the most successful operations have been found amongst the Inca people. There are different theories about why trepanations were performed. Some say it was done to relieve pressure caused by internal bleeding (there is sometimes evidence of another skull trauma that can have occasioned the procedure); others suggest that it was to cure severe migraine, epilepsy or mental illness. Some trepanned skulls, including that of one individual who had had two healed and one unhealed trepanations, show traces of severe sinus infection that had spread to other parts of the skull. There is another example of an adult who had suffered a brain tumour and a child who had probably had scurvy. But many diseases, such as mental illness, leave no skeletal traces. French surgeon Paul Broca (1824-1880) was the first modern-age scientist to accurately describe the practice, which he did in a monograph from 1867 on a Peruvian skull with a healed trepanation, the result, he concluded, of successful prehistoric surgery.

Carl Fürst wrote in Fornvännen (Sweden’s oldest journal of antiquarian research) back in 1917 that it could be more difficult to confirm unhealed trepanation since it can resemble postmortal damage and have taphonomic causes (the decaying processes that fossilise organic material after death). This issue has been addressed by numerous authors, including John Verano, who raises other differential diagnoses, such as congenital defects or disorders, diseases and trauma.

In his article, Carl Fürst noted that while Sweden was littered with examples of trepanation from the early and late Iron Age, most of them came from Alvastra. Anders and Gustaf Retzius both researched and wrote about the early trepanation finds from Sweden, including the Alvastra skulls.

Scientists have identified five different ways of making the hole. 1) Scraping (recognisable by the chamfered edges); 2) Excavation; 3) Drilling and sawing (the surgeon drills several small holes in a circle and then uses a saw to connect them); 4.) Sawing (the surgeon saws out a square of bone that can then be lifted out); 5) Gouging. In this last procedure, the surgeon made a hole with a tool called a trepan, a hollow, serrated cylinder that was described already in the writings of Hippocrates. By the time of Roman physician Celsus (25 BCE – 50 CE) the trepan had acquired an extractable guide pin and a transverse handle, not unlike that of a modern corkscrew.

This tool became the standard during the Middle Ages and was still in use in some countries well into the modern era. Some versions of the trepan have a support device. The use of a trepan was illustrated in a book from 1542 that is now housed in the Hagströmer Library. Called Feldtbuch der Wundartzney it was written by the German army surgeon Hans von Gersdorff. The French surgeon Ambroise Paré (1510-1590) made improvements in the tools for head surgery and trepanning, while in Renaissance Italy, glass shards were still the instruments of choice.

The development of trepanation
Swedish doctor Karl Petter Dahlgren (1864-1924) enlisted the help of instrument-maker Max Stille to invent a pair of trepanation forceps in 1896. The problems he was trying to solve were that the trepanation procedure was too slow and the surgeon tended to shake too much when chiselling out the skull. After trials using a rotary saw on a corpse, they managed to construct an ingenious tool. The new forceps sliced through the cranium from the inside out and took just a few minutes to excise a removable piece of bone. They were also easy to sterilise. Their forceps were modified in 1909 to be operable with both hands so that more force could be applied when cutting through thick bone. This model was further developed by American neurosurgeon William Henry Hudson (1862-1917). In 1897, Italian gynaecologist Leonardo Gigli (1863-1908) invented a wire saw that was first used to saw into hip bones but became the standard implement for craniotomies. According to an article on trepanation from the 1800s, inflammation was still the greatest risk when performing trepanation, primarily caused by a lack of personal hygiene, dirty homes and the insalubrious urban environment that was a breeding ground for secondary infections.

New theories
The roof of the skull and the brain itself have different magical beliefs attached to them in many cultures, and amulets have been found made of pieces of cranial vault. In the 1990s, a theory was put forward that people might have believed a patient was dead, when he or she was merely unconscious. During trepanation, such a person might have miraculously woken up during the procedure (hence occasional evidence of half-completed operations), so the unhealed holes would represent the patients who were genuinely dead. Otherwise, this way of “raising the dead” could have been something that surgeons tried to repeat.

Trepanation is still performed in some developing countries, while a burgeoning interest for instructions on the Internet has prompted doctors to issue a warning in The British Medical Journal against do-it-yourself trepanations at home.