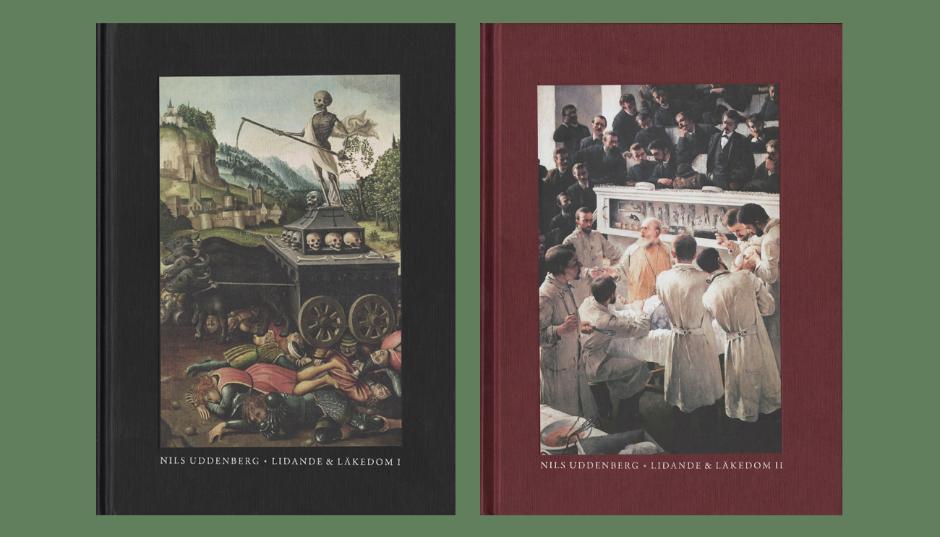 Hagströmerbibliotekets skriftserie (The Series of Publications issued by the Hagströmer Library) consists of 21 items at the time of writing. It was initiated by Ove Hagelin and the first book was called Om botanikens grunder (On the Foundations of Botany), Atlantis, 2007. This is an edition and translation into Swedish of notes made by one of Carl Linnaeus’ pupils during the scientist’s lectures on botany in 1748. The work was compiled and issued by Lars Bergquist and is a handsome volume of 504 pages. Carl Linnaeus, Lars Bergquist, and Ove Hagelin are names that appear repeatedly in the series and in due course we intend to describe – in no particular order – every item in the series. Another name that is found time and time again is that of the eminent scholar Nils Uddenberg. His latest contribution is number 19, Lidande och läkedom (Suffering and Healing), Fri tanke, 2015.

In Lidande och läkedom I and II Nils Uddenberg paints a broad-brush picture of the growth of Western medicine from ancient times to around 1950, and reveals how people have tried to handle disease and death over the millennia. He describes developments in the theory and techniques of medicine, and leading us through the plagues that claimed millions of lives chronicles how people have tried, more or less successfully, to overcome such devastating epidemics. Presenting a cast of influential physicians, often with detailed biographies, Uddenberg surveys the global stage, albeit with a fond focus on his native Sweden. Accounts of individual suffering over the ages and the treatments offered add substance to his history, while the abundant illustrations, many of which were taken from the Hagströmer Library collection and with many objects exclusively photographed for this work, lavishly complement the text.

Nils Uddenberg was awarded the Letterstedtska författarpriset (The Letterstedt Prize) 2016 for the books. This award is issued by the Royal Swedish Academy of Sciences for an outstanding original publication in science, literature or art the previous year.