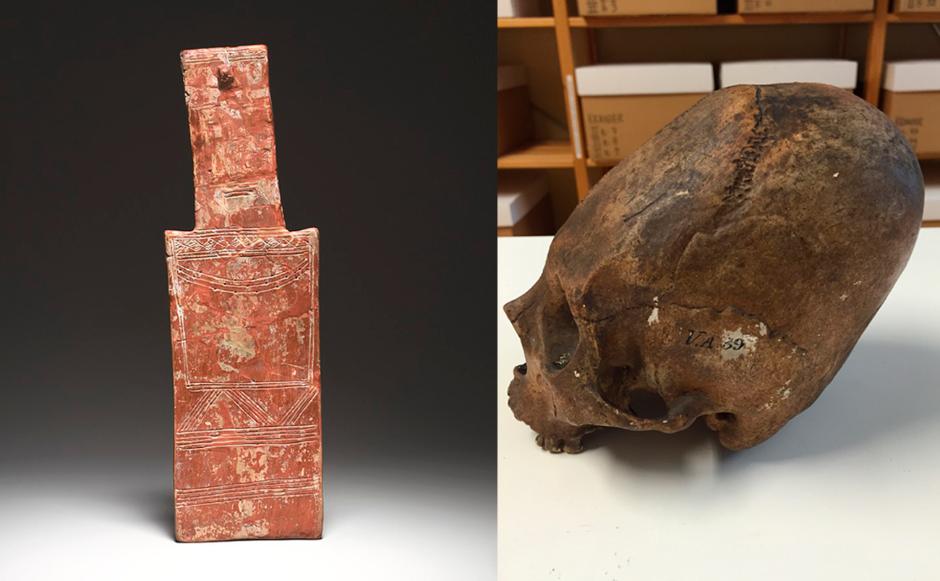 In our modern society, people like to express their personality and status through their clothes and the status symbols they choose to buy. Today, many people decorate their bodies with tattoos and piercings. While this desire to belong to a particular social sphere has always existed, it has manifested itself in different ways. In China, they bound upper-class women’s feet (lotus feet) and in some African and Asian countries, people still lengthen their necks with metal rings.

When we hear the word trauma, we tend to think of sudden accidents that cause serious injury, such as a car crash or a broken bone. However, there’s another type of trauma – a low-intense one that can cause significant deformations, and throughout human history different cultures have practiced the deliberate reshaping of skulls.

Technique
If a baby’s skull is bound to a hard surface with, for example, a cloth, it affects the form of its skull as it gradually grows and becomes thicker and harder. Usually, a board of some kind was connected to the binding. If the pressure is prolonged, the natural basic form of the skull can be changed dramatically. So in cultures past, if the cloth and board were removed at about the age three, the child’s skull had become “programmed” to adopt a new shape. Archaeologists have found shaping tools in graves. It is likely that the brain was not so affected by these reshaping procedures, other than that the sutures could fuse slightly differently and form more sutural bone (small, additional seams) to help offset the need for extra growing space. The brain adapted and grew within its new bony casing.

Early finds and different theories
This type of custom has existed at different times and at different places around the world. The first types of find come from 45,000-year old Neanderthal bones in the Shanidar cave in Iraq, while in the Andes 10,000-year old finds have also been made. It is thought that the purpose of the practice was to indicate membership of an elite. There are also examples of cranial deformation from Crete’s Minoan culture and from Akhenaton’s reign during Egypt’s 18th Dynasty, when he and his family were depicted with elongated skulls. It is believed that this created a head-shape trend, but as no skeletons have been found the only evidence comes from the artwork. Perhaps the fashion merely concerned how people wanted to be depicted, not how they shaped the actual skulls of their children. Egyptologists have sought possible explanations for Akhenaton’s peculiar head shape and suggested that he could have suffered from acromegaly (a disease caused by excess growth hormone) or hydrocephaly. In the Andes, there is an identifiable parallel between cranial shape and the shape of a nearby holy mountain, from which it might be surmised that the shape of the skull had a spiritual or religious significance in certain cultures.

Cyprus
Many shaped crania have been unearthed on Cyprus, including from Enkomi, the site of a dig conducted by the Swedish Cyprus expedition in 1927-1931. Kirsi Lorentz, who has researched into this field, has identified three types of cranial deformation – anterio-posterior, rounded and post-bregmatic – depending on the direction in which the change in shape was made. They are the terms used both subsequently in the study of cranial measurements and as anatomical terms of location. The first is the oldest type (8,000-7,000 BCE) and the last is unique to Cyprus. However, the different types appeared at the same time and place. She mentions that these individuals had lived to an old age so no harm to the health can be inferred from the procedure. Research continues on trying to ascertain the mobility of populations and peoples using head-shape data. For example, scientists have taken isotope samples of the element strontium to see where the individuals originally came from. Strontium is stored in the teeth as a kind of fingerprint of where a person was living when his or her teeth calcified – i.e. when a child. It is always women who have the most pronounced deformations.

One way of shaping crania was with so-called cradleboards. A cradleboard was a kind of wooden or woven plate attached to a bag that allowed women to carry their babies on their backs. Boards like this, apart from their practical function, were also used to shape babies’ skulls. The archaeological grave material also includes terracotta figurines similar to miniature cradleboards. It is thought that these small figurines are representations of real cradleboards and that they might have had particular cultural significance. They are called plank-shaped figurines. One early interpretation was that the figurines depicted gods, goddesses or ancestors; in more recent times, however, they are seen more as miniature objects. For instance, what were once interpreted as a goddess’s breasts were probably mere decoration. Despite their being found in graves, they are thought to have been used by generations of the same family – just like real cradleboards were. Examples of such miniatures can be found in the Cyprus collection of the Mediterranean Museum in Stockholm.

North America
Cradleboards were also used by Native Americans, who we know had rituals and customs surrounding babies before and after birth and during the first delicate year of life. The sacred cradleboard was made by a family member – often a grandmother – and in many ways represented and protected the baby’s body, and bring it health and life. If the baby died, the cradleboard could be destroyed or discarded. Alternatively, the baby was buried in it, or it was laid on the baby’s grave. It could also be filled with selected plants and feathers and carried by the mother as a symbol of mourning for up to a year. Chinooks (who practised cranial deformation) are known to have used cradleboards. A Chinook woman is depicted in an 1846 painting by Paul Kane.

During the 4th to 6th centuries, the practice of shaping crania spread amongst the nomadic tribes such as the Huns, and it is thought that it could have been passed on by them during the Great Migration. According to scholars, the different nomadic peoples used different techniques to distinguish themselves from one another.

Pseudoscience
There are alternative theories about that deformed crania are a sign of aliens or a new species of human. There will probably always be people with over-active imaginations keen to foment different conspiracy theories as soon as discoveries of astonishing historical finds are published. A collection of craniums discovered in Hypogeum, an underground Neolithic cult and burial site on Malta, gave rise to a rumour, which circulated for about a decade, that they were deformed even though they are just normally dolichocephalic (i.e. elongated). It is always important to be source critical.

The anatomical collection at KI’s Medical History and Heritage Unit contains several examples of deformed skulls. Some are from Peru and some are Chinook, an indigenous group living on the middle and lower reaches of the Columbia River in Oregon and Washington. The Chinooks practised this custom well into the 1800s. Two of the crania are labelled flathead indians, which actually refers to another group. The two crania were donated by ship’s captain Nils Werngren (1815-1897), who brought these and other such finds home from his travels around the world. The collection also has some plaster moulds of deformed crania.