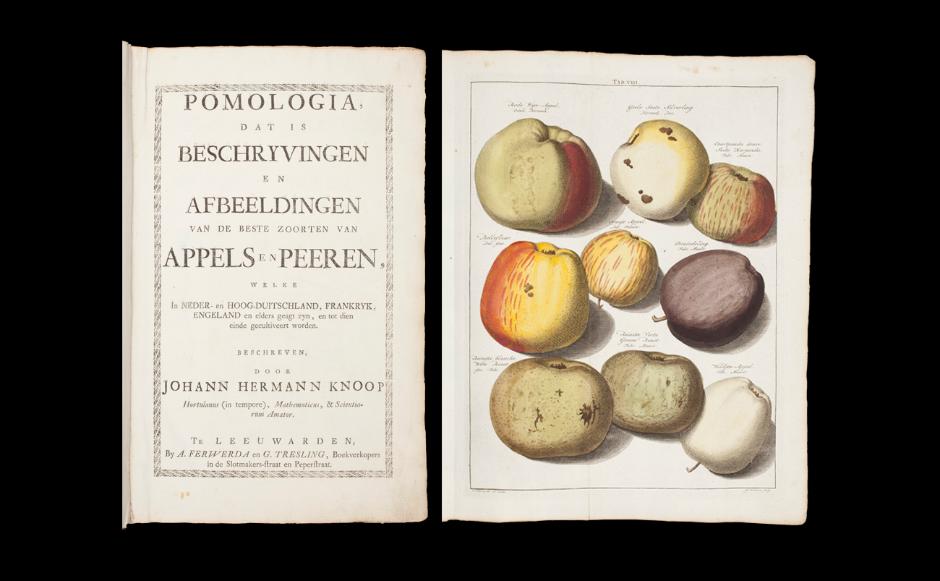 For most of us, summer holidays are over and autumn is approaching sooner than we’d like. The apple season is already on its way, led by the ephemeral White Transparent apple, with its delicate, greenish-white skin and tender juicy pulp. Let’s seize the opportunity to take a look at the Malus domestica, (Borkh., Rosaceae), or common apple.

The wild apple originated in Central Asia, and spread westward along the Silk Road. The number of apple varieties have since increased greatly, both spontaneously and due to intentional selection and inoculation. Pliny the Elder, back in Roman times, discussed the art of grafting and mentions some 20 different varieties of apples. Parkinson (1640) described 58. By the nineteenth century the number reached more than 600, and today we have about 7,500 cultivars worldwide.

Apples have long been associated with love and fertility, as well as with sovereignty, seen, for example, in the symbolic Imperial Apple, Globus cruciger. According to another common belief, the apple is valued for its health-bringing properties, a topic to which I will return below.

Myths and legends
The apple is one of the most legendary fruits, allegedly making its first appearance as the fruit of the Tree of Wisdom in the Garden of Eden. This interpretation was influenced by the Latin homonyms malus (evil) and malus (apple tree, a word borrowed from the Greek me:lon). Various commentators to the Torah, identified the fruit mentioned there as figs, grapes, nuts, citrons, or even wheat.

Greek mythographers spoke of the Golden Apple in the story of Paris and Helena. At the wedding of Peleus and Thetis, the Goddess of Discord, Eris, peeved at not having been invited, tossed in an apple with the inscription “to the most beautiful one.” Athena, Aphrodite, and Hera fought over the title, and the mortal prince Paris was asked to make the decision. Having been bribed, Paris chose Aphrodite, and this dispute eventually led to the Trojan War as depicted in Homer’s Iliad.

A Nordic legend describes how the Aesir gods received their perpetual youthfulness from the apples of Idun. Snorri Sturlasson tells us in the Prose Edda how Idun was abducted from Asgard, at which point the other gods started ageing and were compelled to bring her back again.

Lastly, we have an anecdote that is at least somewhat closer to the truth. Sir Isaac Newton supposedly had an apple fall on his head, and from this experience, derived the brilliant idea of how planets remain in orbit due to gravity. Although Newton never wrote about his brainstorm, a contemporary witness, William Stukeley, recounts it in his memoirs of Newton (The Royal Society, MS 142), but apparently omits the detail of the apple colliding with his head. That part of our anecdote seems to have been plucked out of thin air.

The curative properties of apples
If we turn to the field of medicine, apples have a long tradition here, as well, although many contentions have not been scientifically proven. Hildegard of Bingen (1098–1179) was an abbess as well as a writer of theological, botanical, and medicinal texts. In her role as a medical practitioner, she drew on ancient Greco-Roman wisdom, dietetics, and herbal remedies. In addition to various therapies she presented, she included apples in her most important dish – a porridge based on spelt semolina, apples, and honey. From this multi-talented woman’s achievements, we now proceed to a source a bit closer to our time, but definitely less reliable.

Albertus Magnus (c. 1200–1280) – a saint, friar, and bishop – is a man about whom many tales have emerged, due to his fame as a natural scientist and commentator of the writings of Aristotle, and as reported later, his vaunted skills in alchemy and magic. A publication which definitely had nothing to do with him is the Albertus Magnus Redivivus or The Book of Secrets. The copy kept in the Hagströmer Library is from 1845, but the book was circulated in several versions and editions, and retained its popularity all the way into the early twentieth century. Here we find the apple presented as a means of alleviating many ailments, such as warts, icterus, constipation, a means of purging, and finally, as a love potion, and I quote (translation my own):

Cures for warts
Cut, at a waning moon, a cross in the calyx of a Borsdorfer apple, press it against the wart and then bury the apple in a cemetery. When the apple has decayed, the wart will be gone.

Cut, at a waning moon, a firm apple in four equal parts and rub the warts vigorously with these parts, until they bleed, if possible. Then tie the apple parts together, three times crosswise, with a woolen yarn secretly stolen. Bury them under a roof gutter, or, throw them into a stream. When the apple decomposes, the warts will disappear.

A purgative
A peeled Borsdorfer apple grated upwards toward the flower will cause purging when you eat it; if you grate it downwards toward the shaft, it will relieve diarrhea.

A cure for icterus
Take an unripe apple, cut a slice and scoop out a pocket in the apple. Fill the hole with saffron and put the slice on as a lid. Tie a yellow silken thread around it, fry it over the flames, and give it to the ailing person to eat.

A cure for constipation
Fine sour milk, buttermilk, boiled apples, boiled plums, and boiled red or brown cabbage, taken one at a time, are useful remedies for constipation. Ripe Borsdorfer apples, plentifully eaten, will relieve the most persistent constipation.

A potion for obtaining a woman’s love
There are secret methods that the cabbalists call love apples. They are to be used as follows: At dawn on a Friday, go to an orchard and pick the most beautiful apple. Write your name in blood on a piece of white paper, and add the name of the person you wish to be loved by. Get three strands of her hair and tie them together with three strands of your own. These are to be used for securing this paper with another one, on which you should write only the word “Scheva,” also with your own blood. Split the apple in two, take out the seeds and put in the papers secured with the hair. Use pointed needles of myrtle to press the halves together, and dry the apple in the oven to make it hard and parched. Then, enfold it with leaves of bay and myrtle; put it surreptitiously under the woman’s pillow, and before long she will be declaring her love for you.

The last potion actually does seem to go back to ancient times and cabbalistic tradition, though not with apples in it: “To make yourself irresistible: take elecampane root, an orange and ambergris. While mixing these together add in a piece of paper with the word ‘Sheva’ on it” (in Swedish the ingredients are ålandsrot, apelsin, och valrav). The magic word Sheva might refer back to the wise Queen of Sheba. Strange how tales circulate!

A modern prescription
The most well-known apple-related prescription of today is the one that we have all heard, at least as children: “An apple a day keeps the doctor away.” In order to verify the accuracy of this prescription, a serious and well-justified study was carried out last year by scientists at The Dartmouth Institute in Massachusetts. Published in the highly regarded medical journal, JAMA Internal Medicine, it affirmed a correlation between American adults eating an apple a day and their use of fewer prescription medications. I cite the conclusion:

While the empirical evaluation of medical proverbs may allow us to profit from the wisdom of our predecessors, we were surprised to find a paucity of prior investigations of popular aphorisms. Our investigation has allowed us to update the well-known proverb to clarify that, if anything, apple eating may help keep the pharmacist away. Were this borne out, it certainly could have health policy implications.

The first appearance in print of the aphorism is found in the February 1866 edition of Notes and Queries Magazine: “A Pembrokeshire proverb: ait a happle avore gwain to bed, An’ you'll make the doctor beg his bread.” Now, in solidarity with all our colleagues at the Karolinska University Hospital, and elsewhere in the realm of healthcare, there is good reason not to spread this proverb further. We certainly wouldn’t want our physicians breadless, would we? On the other hand, there is another Swedish proverb with the wording “better breadless than clueless.” I certainly prefer my doctors to have a clue of what’s going on, ergo, perhaps we should yet again consider whether apple eating isn’t the better diet prescription, after all.

Eva Nyström is a Rare book librarian at the Hagströmer Medico-Historical Library. She has a background in Classics and holds a PhD in Classical Greek. She has devoted most of her research to Medieval and Early modern manuscripts, bookbindings, and Early printed books. Presently, she divides her time between librarianship and a research and digitization project, concerning Old Swedish manuscripts held at Uppsala University Library and the Royal Library in Stockholm.