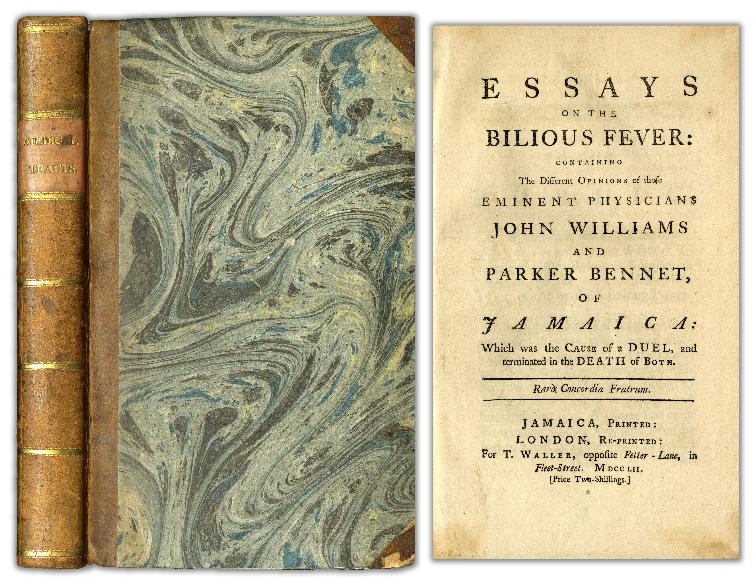 A Medical Dispute in Kingston, Jamaica, in 1750

Arguments in the academic world can be quite fiery but the case of the two physicians John Williams and Parker Bennet of Jamaica went completely over the top.

In 1750 John Williams had a short work on the yellow fever published in Kingston, Jamaica, called Essay on the Bilious or Yellow Fever. His conclusions about the Old World origin of the disease were questioned in strong words by a Kingston physician called Parker Bennet in his An Enquiry into the Late Essay on the Bilious Fever. The general opinion at the time was that the yellow fever had been brought to the Old World from America. And this was the view held by Bennet who also maintained, contrary to Williams, that blackwater fever was the same as yellow fever. After Bennet’s rather condescending reply the educated arguments were left behind and insulting papers, both in prose and verse(!) were issued by the antagonists. What happened next is told by the anonymous author to the preface to the 1752 London reissue of both papers Essays on the Bilious Fever: Containing the Different Opinions of Those Eminent Physicians John Williams and Parker Bennet … Here quoted in full:
"TO THE PUBLIC.
An authentic account of the death of the unfortunate doctor Williams and doctor Bennet of Kingston in Jamaica, on the 29th of December, 150, caus’d by the following Papers.
After a great deal of ill language they proceeded to blows, which caused challenges and acceptance, and the morning after doctor Bennet went arm'd with his sword and a brace of pistols to doctor Williams's door very early, and knocked him up; Williams saw from his window who it was, and what he had to expect; upon which he loaded his pistols with Goose, or Swan shot; and slinging his drawn sword by a ribband upon his wrist, came down, and opening the door, just sufficient to admit his hand with a pistol, poured a shot full into poor Bennet's breast, who had delivered his own arms to his boy, whilst he called Williams out; which when he had done, he continued to pursue Bennet, reeling to his boy, and wounded him with the other pistol in his knee. Bennet by this time had gained his sword only, which was fastened so strongly in the scabbard, that with all his endeavours he could not draw it. When Williams had fired his second pistol, Bennet turned upon him, thanked God he had power to be reveng'd, and whilst he endeavoured to release his imprison'd weapon, begged of God to invigorate him a few moments; but Williams then gave him a mortal thrust under his right arm, which pierced the lungs on both sides; having done this he was turning to run for it, but that moment Bennet drew his sword, and made a pass at Williams, which entering under the right clavicle or collar bone, pierced the internal jugular vein, and finished its course in the shoulder blade, breaking off at the place of entrance; however, Williams run ten or fifteen yards and then fell, suffocated with his blood, and never spoke more. The unfortunate Bennet survived him about four hours, and then expired, in the most agonizing pains imaginable." What about the issue that caused this tragicomic chain of events? One of the papers was actually so good that it was plagiarized 20 years later by a Charles Blicke. John Williams had drawn the right conclusions.
This anecdote has also been retold by Nils Uddenberg, on my suggestion, in his great work on medical history, Lidande och läkedom I-II (Fri Tanke, 2015), part II, 285.